By Claudia on January 8, 2012 in Meditation, Yoga
Imagine saying: OK, I am off to sit and do nothing else for the next 6 years, no food, no clothing, no real shelter required, all the energy goes towards realization. This is Ram Bahadur’s path. A boy from the Bara district of Nepal whose mother  has the same first name as Buddha’s mother, and who began meditating non-stop in the hollow of a tree in May of 2005, at the tender age of 15. 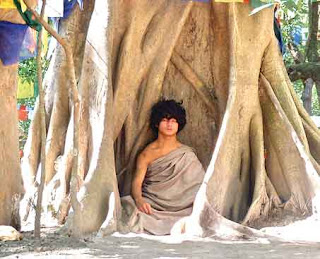 It was not long before crowds of people began gathering around him, some with the intention of protecting him, some coming for blessings, some out of curiosity, some to observe weather it is possible indeed to live without water or food and not move at all, without dying.

Some people assume he is the incarnation of the Buddha but he himself has denied this explaining that he does not have the energy of a Buddha and he is at the level of a Rimpoche.

The BBC did a 5 part documentary on their observation of Ram Bahadur, by the end of which the boy disappeared deeper into the jungle because “there was no peace”.

Indeed committees of locals were forming and arguing over politics (should they let the media come close to him and for how long, etc), money was being gathered from donations, and, well the real world was coming too close to him I suppose. [If you cannot see the video below here is part one].

He is now meditating in a bunker built for him as per his request, and there is a lama guarding the entrance.

It is interesting how he took onto the path with such determination, and that he meditated for years, but perhaps the highlight for someone far behind is his message, for he did emerge twice and spoke.  Both speeches are on his wiki page, below is the second one from 2007:

Prayers of Kunchu Suma – message of peace for all living creatures and for the spiritual prosperity of humankind. Salutations to all spiritual seekers, saints, religions and all organizations. After I was commanded by the spirit to save and uplift humankind and the creatures of the world, I have abided by the promise to save the ephemeral world from the ocean of emotions and to free the world from the worldly sins.
I have been contemplating single-mindedly (Dhyana) to free humankind and all living creatures. All sentient beings want to get freed from worldly sorrows and pains. But by birth, they are not equipped as humankind to seek after spirituality and get freed. They are also praying to God (the source/spirit). They are happy to be in this world.
Humankind are creating traditions that will destroy the entire humanity and living creatures. In the name of religion, killings, violence, anger, jealousy and divisions are being promoted. There is only one source; the spirit has one form; the souls of all humans are the same, only the tradition and customs are different. Always embrace the path of mercy, compassion, non-violence, peace; this is the message I want to convey to our society and to all the citizens of the world. True spirituality, the true human spirit, will always search for truth. The search for truth is the only beneficial way of humans. Despite the existence of thousands of paths, chaos, greed, attachment, anger and jealousy have imprisoned our society and humankind. In this way the world is heading towards destruction.
So, it is high time that the citizens of the world must think about it. Humans should never forget their ultimate spiritual duty and their society. Refrain from killings, violence, greed, jealousy, attachments and evil character. Shed the tears of mercy and compassion; show to the world the way of salvation. After we die it is extremely difficult to get back a human life. Everyone thinks that we don’t reincarnate after death. No, we receive a human life due to our virtuous work. We earn the fruits due to the merits of our work. Now the world is governed by three forms. The first form is greed; the second form is anger; third form is attachment and jealousy that are ruling this world. May all the religious traditions change. All the religious people need to first find the Truth, and by cultivating mercy, compassion, non-violence, and peace in their hearts, they need to beautify the world with the way of salvation. I will continue to contemplate and meditate for the salvation of living beings by being focused in my path of wisdom until I find the ultimate form of enlightenment, the Samyak Sambodhi. Salute to the ultimate form of enlightenment and may peace be with everyone.

And so those are good places to start working on, on my own anger, greed, and jealousy.  I find reading the Yoga Sutras daily very inspiring, putting them to work in actual real world situations a bit more challenging.  A work in progress.