By Claudia on January 10, 2012 in How To, Mysore, Travel
Paul Dallaghan shared with us his technique for avoiding jet lag towards the end of Teacher Training circa March of 2009 in Thailand, and since I -like most other students- was about venture into a 28+ hour plane-ride, my ears perked up.
I don’t remember all the details, but what did stick with me was the part of not eating anything, at all, during the whole ride.  The reasoning was that if your body guesses it is starving all energy will go towards conserving energy and any time references will become secondary and irrelevant. He explained it much better than me.

He also said that in the morning he normally would do some basic stretching and pranayama and invited us, if we were so inspired, to belch out loud “Guru Brahma, Guru Vishnu..” or any other mantra of our liking.

I was rolling on the floor laughing picturing it.  Still am.  I can’t stop imagining me singing and signaling people around to join me, as if it was cool, from a middle seat of a packed airplane. You had to be there. But I digress.

Before last year’s trip to Mysore I told James about it and he decided to try it and be jet-lag free. I could not. I get too hungry.  But he is stronger.

When He arrived in India he was ‘disoriented’. For example, he did not know that the key was supposed to go in the key-hole to open the door, you know? confused, but not jet lagged.

His brain was not working at full capacity and I should probably have played a game of chess with him right then and WIN!… (darn!) but the actual time difference, it feeling like 3 AM when it is really 3 PM (and which normally takes me 4 to 6 days to adjust to), did not seem to affect him at all.

So this year… I tried it!

The not eating part was easy.  I just slept the whole trip to Dubai and pretended not to smell anything.  Whenever I got hungry I remembered Yoga Sutra 3.31 that says that by performing samyama (the last three limbs of yoga -concentration, meditation samadhi-) on the throat tip, hunger and thirst retire.

Notice I said “remembered” I am way too much of a beginner to brag about anything, however, somehow just putting my attention on it helped me.  Call it beginners luck.  I did drink plenty of fluids though.

The Dubai to Bangalore portion was easier, in a 3 hour flight not much is served.  Then the 3 hour car-ride to Mysore, Gosh! Does it ever end?.  I asked the driver if we could stop for chai, I wanted something warm. He did. Ahhh. 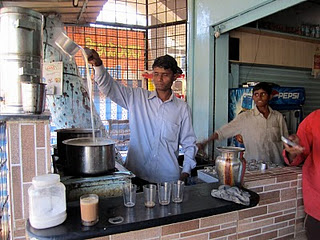 And so at 6 AM I arrived at my home in Gokulam and unpacked the bag I had left from last year.  I put all clothes in the drawers, prepared some tea, got the big bottle of water, and decided to keep going because: the worst thing you can do is fall asleep (or so James tells me).

In all fairness, that is what I did in my past two trips and waking up at 3 PM to go register was not pretty.

So the first thing I did was breakfast! I was now allowed after all, only thing is, I did not remember what time Santosha opened, and since the interenet was not yet connected guess what helped me?  My own book! There it was, in black and white, 8 AM.  It was one of those moments…

Then I got busy. Cleaned up, unpacked, went to Loyal World for food and other supplies, cooked, took a walk, went for more chai, bought a notebook, wrote this, Skyped James awake, and finally… registration.

My starting time tomorrow morning will be 10:30 as is customary these days.  Never done that before so good opportunity to practice yoga and more yoga, in this case the yoga of santosha (contentment) and adjustment to time.

Will the jet lag trick work?  We shall see…. Can that even be considered a cliff hanger?

Buddha Boy
Beautiful Addition to the Routine of the Shala: Chanting

14 Responses to How To Avoid Yoga Jet Lag