At the age of 16. Tirumalai Krishnamacharya had a dream about one of his ancestor, a great scholar named Nathamuni, and about how he had the knowledge of the Yoga Rahasya which had been lost -due to a student missing his appointment for transmission-.

In the dream he was directed to travel to a particular Vishnu temple in the very south of India.

And so he went on pilgrim to the Shrine at Alvar Tirungari, under the hot Indian sun, with what -I am assuming- would have been very little money, and pressumably on foot?  – see map.

Upon arrival he found a door keeper and asked where could he find his ancestor, the man pointed in the direction of a mango tree and told him to go there but only after bathing in the river -the Tamraparani (which I cannot find in the Wikkipedia list of rivers of India). 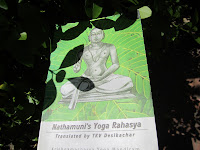 As he came out of the river, Krishnamacharia  fell into a trance (I think I would too, at least collapse, after walking for that long under the sun).

It was in this trance that he found himself inside the tree with a wise man and three disciples.  The wise man recited verses which he listened to carefully.

Upon awakening the man at the entrance -which looked just like the wise sage in the vision- told him he was lucky to have been instructed on the Yoga Rahasya.

I just got my copy of the Rahasya. It was not meant to be sold outside of India as the back cover informs me, but by the magic of Amazon I got a hold of a copy.

Dersikachar, who translated it says that he heard his father recite verses from it often and also tried teaching it to him but he never paid much attention to it, until one day, circa 1965, Tirumalai wrote it down himself and committed his knowledge to paper.

The book addresses pregnancy in detail, pranayama and asanas. It is easy to read as it is mostly “slokas” or sentences which are then explained, followed by Desikachar’s translation.

The asanas are coincidentally very much all the ones you find in the first, second and third series of Ashtanga yoga:

How deep does the rabbit hole go?

RELATED POSTS:
Krishnamacharya: 8 Stories That Reveal What Kind of Man He Was
My Favorite Krishnamacharya Story
Yogi’s Guide to Visiting Mysore, in South India